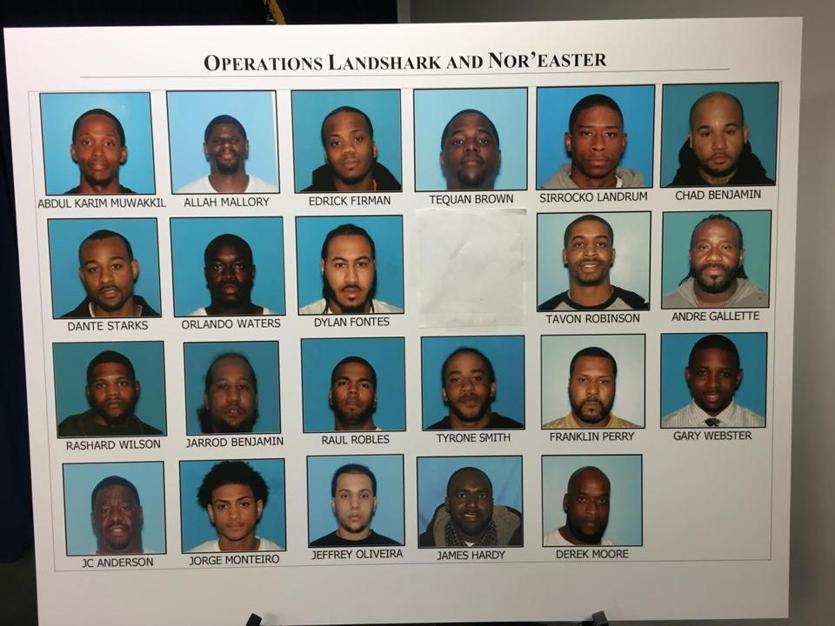 The Boston Globe is reporting that 29 people -- including one Boston city employee -- have been arrested and are facing state and federal charges relating to a drug and gun trafficking investigation. Three of the individuals involved have already been indicted by a grand jury. The press release, put out by the Suffolk County District Attorney's Office states that the three targets of the investigation are charged with distribution of heroin and distribution of firearms, and are all three charged as habitual offenders.

Dana Brown and Vito Gray are charged with distribution of a class A substance -- carrying a maximum of 10 years. They allegedly sold 20 and 26 grams of heroin to undercover officers. Since the lowest threshold for trafficking heroin is 18 grams, it is fair to infer that the sales total weight was sold over the course of several transactions (unlike federal court, prosecutions in Massachusetts do not aggregate the weight of all alleged sales).

According to the press release, Terrell Walker is charged with unlawful sale and possession of a firearm. Unlawful sale of a firearm carries a maximum of 10 years, and unlawful possession carries only 2 years, unless the possession occurred not at home or work (ie. “carrying a firearm”) in which case the maximum is 5 years. Second, third, and fourth offense offenses for carrying a firearm have higher maximum sentences, but the press release does not say that Walker is charged with carrying, nor does it say that the charge is a subsequent offense.

In fact, the press release says that although Walker was previously convicted of murder in the shooting death of a Boston Police Detective, it also says that conviction was overturned on appeal. The press release does say that all three defendants have prior convictions for violent offenses such as robbery, which could possibly subject them to higher maximum sentences and mandatory minimums under the Armed Career Criminal (also known as ACC or 10G) statute, but I have never met a judge or prosecutor who believes it is legal to apply the habitual offender enhancement to an armed career criminal sentencing enhancement, so even though they may face sentences as high as 15 to 20 years, the most those charges could add is 5 years to the 10 year minimum they face as habitual offenders charged with distribution of heroin.

Make no mistake, 10 or 15 years is a lot of time, but these are prosecutions that the state clearly put a lot of time and effort into. They went as far as to invoke the habitual offender statute. It is remarkable, therefore, that it looks like the real exposure for these defendants is not higher. Meanwhile, the Commonwealth has yet to prove their guilt in court, they are presumed innocent.